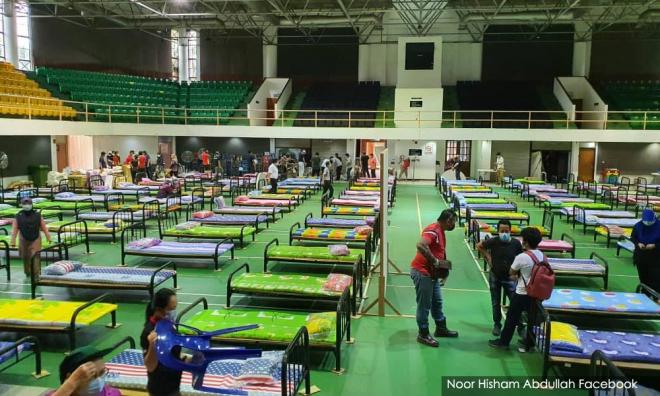 Below are verified locations that are reported to be affected today.

If you know any locations which were announced today but are not listed here, please send an email to [email protected]

The mall's management announced that a contestant at a beauty contest held in the mall on Oct 25 has tested positive for Covid-19 following a test conducted on Oct 28. She was in close contact with an individual who tested positive on Oct 26.

The mall assured that it has strictly adhered to standard operating procedures and the event space had been sanitised on the event day, in addition to frequent deep-cleaning and daily fogging at the mall since March.

The hair salon announced on Oct 29 that its director and all staff members have tested negative and are being quarantined, while the shop has undergone deep cleaning.

A day earlier, it said a part-time receptionist had called in sick last week following direct contact with a Covid-19 patient, and had since received news that he had contracted the virus.

The bistro announced on Facebook today that a performer there had just tested positive for Covid-19. Her last performance at its premises was on Oct 25.

It said the bistro is closed from Oct 30 onwards until further notice, and urged those who visited on Oct 25 to undergo testing.

The Isuzu truck dealership said yesterday that one of its sales advisors has tested positive for Covid-19. Its showroom had been closed for disinfection from Oct 27 to Oct 29.

All other staff members have tested negative for Covid-19 on Oct 29, it added.

The resort announced on Facebook on Thursday that a guest who visited its premises on Oct 24 from 2pm to 8pm has since tested positive for Covid-19. The resort will be closed until further notice.

It assured guests that it routinely sanitises and disinfects its common areas and guest rooms, including an additional round of fogging after the case was discovered.

The restaurant said today that one of its dine-in customers on Oct 24 has tested positive for Covid-19. The patron was present between 7.30pm and 8.30pm that day.

It said the restaurant will be closed pending further instructions from health authorities.

The BMW car dealership said today a patron who visited on Oct 25 has tested positive for Covid-19, and it has immediately taken steps to disinfect its premises.

All employees have taken Covid-19 tests and the results were negative.

The company said it has carried out sanitisation works at its premises, offices, warehouses and common areas after an employee was tested positive for Covid-19.

The employee tested positive on Oct 27.

All staff will undergo screening at a private hospital today and tomorrow, it said in a notice.

A lawyer attached to the company's Miri office had been tested positive Covid-19 on Oct 28.

According to Sandhu & Co managing partner Satinder Sandhu, the lawyer had taken to the hospital while his colleagues at the Miri office were placed under quarantine. The premises are now temporarily closed as required by the Health Ministry.

Satinder said that neither the lawyer who tested positive nor his colleagues from Miri office had visited their Kuching office for the past six months, and thus the latter is unaffected.

The branch is temporarily closed for disinfection after a staff member had contact with a person under investigation for Covid-19 infection.

This is according to a notice posted by the bank at the branch, Nanyang Siang Pau reported.

A Malaysian staff at the embassy tested positive for Covid-19 on Oct 25 but was asymptomatic, the embassy said in a notice on its website.

The staff member did not have close contact with Japanese residents, officials and other visitors of the embassy, it said.

It added measures have been taken to curb the spread of infection at the embassy.

A cluster of cases was detected here, the Health Ministry said.

A total of 11 cases were detected during community screening.

Four members of a family who live at Block 4 of Arena Shamelin Apartment in Cheras have been tested positive of Covid-19.

Malaysiakini learned that the apartment management has put up a notice to alert residents on the case.

According to a resident, this was the second case detected at the apartment. The first one was at Block 2, where a resident was tested positive on Oct 24.

The Star reported that a primary school in Johor Bahru had been ordered to close for seven days from Oct 30 until Nov 5.

This came after a student was tested positive for Covid-19 on Oct 29.

Their offices and other affected areas have been sanitised, while close contacts have been contacted for screening, he said.