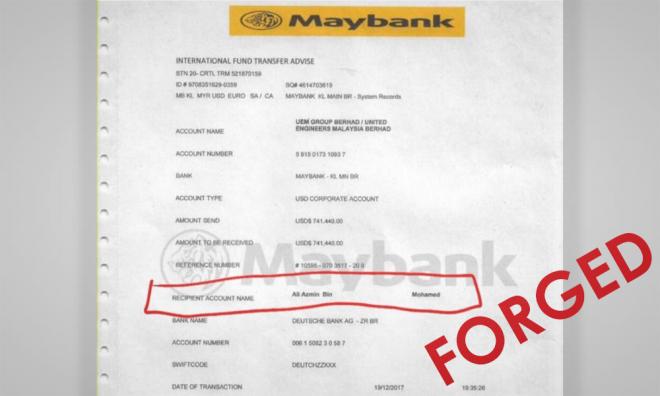 Malayan Banking Bhd (Maybank) has clarified that the fund transfer advice document being circulated online, which alleged a transfer of money to a federal minister using the bank’s account, was forged.

“The ‘fund transfer advice document’ which is being circulated online was not issued by the bank and the Maybank account number indicated therein is an invalid one,” a Maybank spokesperson said today when contacted by Bernama to clarify the matter.

“As the document bearing Maybank’s mark appears to be a forged document, Maybank is taking the necessary action to protect its interests,” the person added.

Copies of the document have gone viral on social media, claiming a certain sum of money belonging to UEM Group Bhd was transferred using Maybank into the account of the minister.

Yesterday, UEM Group Bhd also shot down claims that it was involved in the transfer.

“UEM Group Bhd would like to state on record that it does not have an account at Maybank KL main branch, neither does it have an account with the alleged account number as claimed by various social media sites,” it said in a brief statement.

To clear its name, UEM Group has lodged a police report and is ready to cooperate with the relevant authorities, it added.