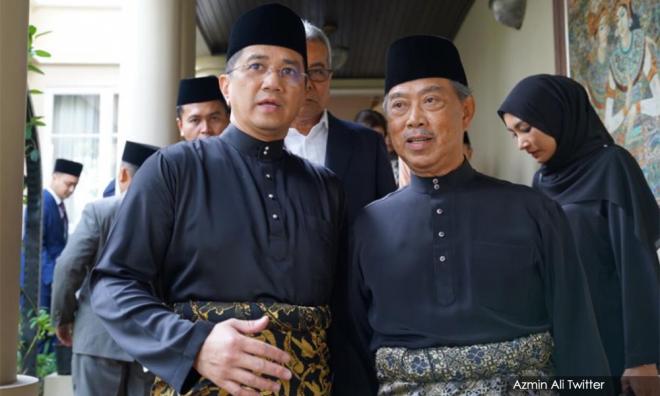 "My gratitude to God for our week-long struggle to form a new government was a success," he said in a statement.

He said this struggle had gone through tense moments but in the end, there was enough support garnered for Muhyiddin Yassin to be anointed as the eighth prime minister.

In congratulating Muhyiddin, Azmin described the new prime minister as someone who is "authoritative, experienced and has integrity".

"We will work towards forming a government with the Federal Constitution and Rukun Negara as its core.

"We are committed towards a national agenda that will spur the economy, ensure shared prosperity, protect the safety and sovereignty of the country, forge unity and ensure institutional reforms," he said.

Azmin was a key figure in the collapse of the Pakatan Harapan administration last Friday. He and 10 other MPs defected from PKR and joined forces with Bersatu MPs who in turn left Harapan.

However, at the time, Azmin insisted he and the other defected MPs were loyal to former premier Dr Mahathir Mohamad and wanted the latter to serve out his full term as prime minister.

These group of former Harapan MPs then joined forces with MPs from Umno, PAS, Gabungan Parti Sarawak and other smaller parties to back Muhyiddin as prime minister.

Azmin was once a rising star in PKR and was believed to have been favoured by Mahathir.

However, Azmin's rift with PKR president Anwar Ibrahim gradually got worse over the past two years, culminating in the defection of PKR MPs, in what is now known as the "Sheraton Move".