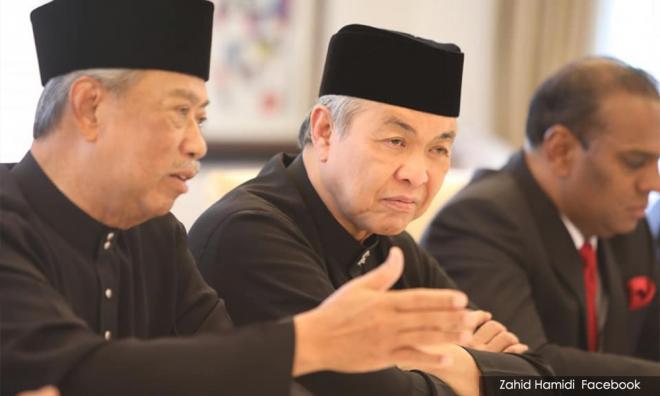 Speaking to reporters outside the national palace after the swearing-in ceremony, Zahid confirms BN’s commitment to helping support the new premier’s policies

“The dark clouds have passed, and the blue skies are here again.

“We will help as much as possible to ensure the rakyat is truly prioritised, the rakyat is defended… and the aid to the people is returned,” he said before driving away from Gate 2 of the national palace.

Following the collapse of the Pakatan Harapan government a week ago, Malaysia faced a political impasse as PKR Anwar Ibrahim, former prime minister Dr Mahathir Mohamad and Muhyiddin all claimed to have majority MPs support for their bid to become the new premier.

Despite the best efforts by Mahathir and Anwar - working together with Harapan to shore up MP support as well as claiming at this morning to have 114 names and as such, having "the majority - Muhyiddin was sworn in as the new prime minister at 10.33am this morning.

The political crisis was triggered when Bersatu, led by Muhyiddin and rogue PKR MPs led by Mohamed Azmin Ali pulled out of the coalition to form a new bloc with Umno and PAS.

This resulted in Mahathir resigning as Bersatu chairperson and prime minister, causing the cabinet to be dissolved.

Our week-long struggle has succeeded, says Azmin
1 Mar 2020
Maszlee: I had a heavy heart sitting with Umno leaders
1 Mar 2020
Muhyiddin takes oath as prime minister before King
1 Mar 2020
Dr M: I told Muhyiddin to wait until graft trials were over
1 Mar 2020