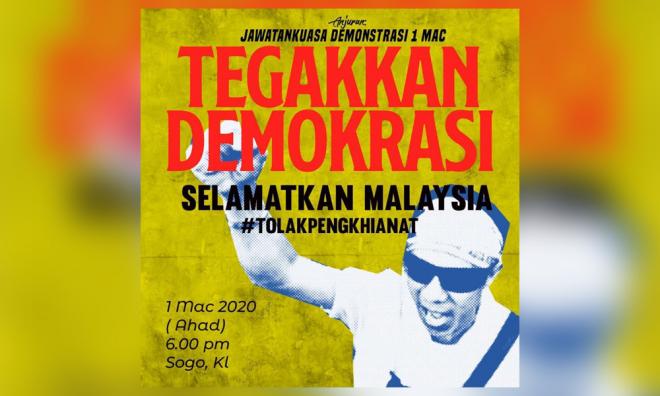 The police have urged the public not to participate in a demonstration that was supposed to be held outside the Sogo shopping centre in Kuala Lumpur this evening.

Dang Wangi district police chief Mohd Fahmi Visuvanthan said the demonstration will disturb the peace and cause a public inconvenience.

"(Moreover) there is no notice for the assembly and Sogo is not gazetted as a protest venue," he said in a statement.

Mohd Fahmi said the police was prepared for any eventuality and will ensure public order.

The demonstration was called by a group calling itself the Save Malaysia Demonstration Committee and claim to comprise of civil society organisations.

The group is calling for a dissolution of Parliament, to continue trials against corrupt individuals and to ban "party hopping".

"We call on all citizens to join us in expressing their dissent and make it clear that the current political situation is unacceptable," said the group in a statement.

This planned protest follows the dramatic collapse of the Pakatan Harapan federal government due to defections and the surprise ascension of Muhyiddin Yassin as prime minister.

Muhyiddin and former Harapan MPs loyal to him have banded together with Umno, PAS, Gabungan Parti Sarawak and other smaller parties to form a new government.

Muhyiddin was sworn in as the eighth prime minister this morning.

Our week-long struggle has succeeded, says Azmin
1 Mar 2020
The second blackest day for Malaysia
1 Mar 2020
Maszlee: I had a heavy heart sitting with Umno leaders
1 Mar 2020
Dr M: I told Muhyiddin to wait until graft trials were over
1 Mar 2020