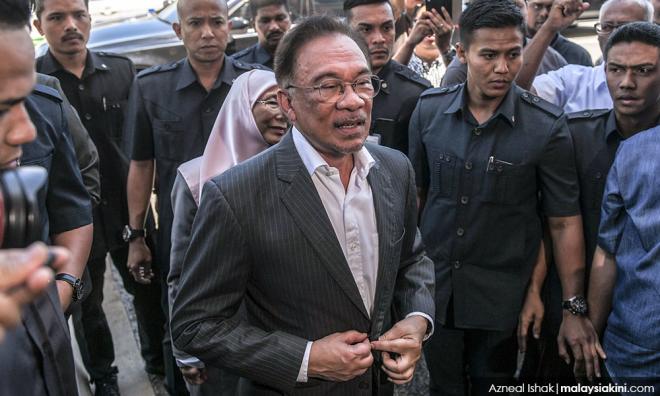 Dr Mahathir Mohamad was not involved in the attempt to create a new coalition government, according to PKR president Anwar Ibrahim.

“It was not him, his name was used (by) those within my party and outside. And he (Mahathir) reiterated what he said earlier, he played no part in it.

"He had been clear, there is no way he will ever work with those associated with the past regime," Anwar told reporters at the PKR headquarters in Petaling Jaya this afternoon.

The PKR president, who met Mahathir this morning, said he knew of the latter's intention to resign as prime minister and pleaded with him not to do so.

Anwar said he could not disclose this earlier because the resignation was not made public.

Despite his attempts to convince Mahathir not to step down, he said the latter was frustrated for being associated with those who are corrupt.

“I did appeal to him on behalf of Keadilan (PKR) and Pakatan (Harapan).

"(I told him) this treachery could be dealt with together. But of course, he was of a different mind, he thought (he) shouldn't be treated in that manner, to associate him with those literally corrupt," he added.

Following his meeting with Mahathir, Anwar had earlier said he was satisfied with the outcome.

“I will have a special meeting of the leadership council. I have just come from the house of Dr Mahathir to discuss some matters.

“And I am satisfied with his stance that we must give priority to the continuation of the reform agenda,” he had said.

Apart from resigning as prime minister, Mahathir also quit as the chairperson of Bersatu, a party which he founded prior to the last general election as an alternative to Umno.

His resignation came moments after Muhyiddin announced the party's withdrawal from Harapan.

The move indicated a possible fallout between Mahathir and Muhyiddin.