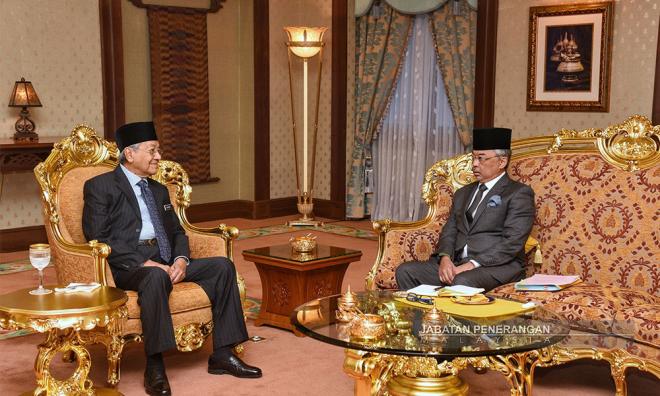 Dr Mahathir Mohamad has been appointed as the interim prime minister, according to the chief secretary to the government Mohd Zuki Ali.

He said Yang di-Pertuan Agong Agong Sultan Abdullah Sultan Ahmad Shah, who granted an audience to Mahathir at Istana Negara in Kuala Lumpur this evening, has accepted the latter's resignation from the post.

"However, His Majesty agreed to appoint Mahathir as interim prime minister while waiting for the appointment of a new prime minister in accordance with Article 43(2)(a) of the Federal Constitution.

"Therefore, during this period, he will manage the governance of the country until a new prime minister is appointed and the cabinet formed," he added in a statement.

Meanwhile, a source familiar with the matter said the Yang di-Pertuan Agong could take up to 10 days to determine which coalition has the majority support to form the new government.

MPs have in the previous weeks signed various statutory declarations declaring support for Mahathir but under different coalitions.

However, loyalties may have shifted in the last 36 hours after it was revealed that Mahathir was not on board a plan to form a new coalition comprising 11 PKR defectors led by Gombak MP Azmin Ali, Bersatu, BN, PAS, GPS and Warisan to dislodge the current Pakatan Harapan government, but with him still as the prime minister.

Bersatu has 26 MPs but there is speculation that some of them are now aligning themselves with Mahathir's position, including his son Mukhriz, who is the party's deputy president.

Harapan leaders, after meeting Mahathir this morning, claimed he was upset at the new coalition as he did not want to work with Umno.

However, Mahathir has yet to break his silence on the matter.

Earlier, PKR president Anwar Ibrahim, who was Mahathir's designated successor, said he pleaded with the nonagenarian not to step down.

DAP and Amanah have also pledged their support for the 94-year-old politician to continue as prime minister.